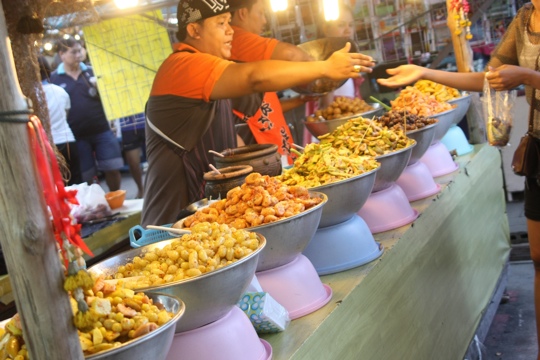 Having been born and raised in a western society (Australia), where food preparation and service of same have some pretty (what I would consider) rudimentary laws; I am constantly surprised by what I perceive to be inadequate in other countries, and yet the only time I have ever been sick was due to food cooked in an actual restaurant.

Over the last few years I have spent considerable time in S.E. Asia, Thailand in particular; but Singapore, Malaysia and Japan as well. Food is never kept heated above 30° (usually being the outside air temperature). And sushi NEVER kept under 20° (say in a shopping centre). I have bought sushi in an open air market from a non refrigerated cart. I have also bought chicken, pork and beef dishes from neighbouring carts where the food has been prepared and sitting for large periods of time.

I’m thinking about this today because right now I’m sitting in a large shopping complex in Bangkok with my wife and her friend. I’ve just had a red chicken and pumpkin curry that simply looked delicious in the Bain Marie and once I’d got back to the table I found it to be luke warm at best! It was delicious, but unfulfilling and so I went to a neighbouring stall and bought some roasted duck with rice.

Again, delicious but cold. Not out of a freezer or even fridge cold, but not hot either. Room temperature, which in this shopping centre environment, I would estimate is about 24°C.

And I’m amazed, continually amazed for many reasons, and not just limited to the following:

– I have never been sick from one of these stalls

– people (generally) mustn’t get sick from them either, else I would assume* they would be shut down

– I have become sick from Bain Marie stalls in Australia

Do these eastern cultures develop an immunity to food containing traces of bacteria? Immunity may be too strong a word, maybe tolerance instead. Ergo, are Australian and western laws so hard and tight that we (as a demographic) are becoming less tolerant to food prepared elsewhere in the world?

– or are Australian laws simply too tight in the face of reality?

This draws me to two possible conclusions::

1. The reality of the situation is that western practices/laws are out of line with what’s really required for safety in food preparation, (I don’t believe this), or

2. That eastern cultures have lead lined stomaches and have developed a tolerance or an immunity as described above and western cultures are becoming more susceptible in this regard (I don’t really believe this either!)

I don’t know what the reality of the situation really is but suffice to say that I have not been sick yet, and (he says whilst clutching at the wooden table and chair in front of him), I hope that this continues to be the case.

* I do follow the old adage that one should never Ass-U-Me anything, but sometimes it’s just unavoidable.